After 9 weeks of play Wes bowed out of the 2013 McCoy’s Premier League darts, losing out 7-5 to Andy Hamilton in a must win game on ‘Judgement Night’.

“I’m really gutted, not only to be going out of the Premier League but that I didn’t perform tonight,” said The Warrior. “It was a big game for me and I knew I had to win, and I was trying my best. “I came into tonight playing really well after winning the European Darts Trophy at the weekend and my confidence was high. I wasn’t nervous but the scores just didn’t go in. “As a whole, my scoring just wasn’t there and, when I’m on form, that’s usually the best part of the game. I’ve loved every minute of the Premier League and it’s been the highlight of my career, and I’ve just got to focus now on the rest of the year.” “I would like to thank my fans, sponsors, friends and family for their support throughout the Premier League and hope to earn myself a place in next years competition.” Meet Wes at Cash Coverters in Blackpool on Friday 12 April, Waterloo Road, South Shore, Blackpool , FY4 1AB.

Wes completed a brilliant Easter weekend of darts at the Glaspalast in Sindelfingen, Germany with a 6-5 victory over Paul Nicholson in the final of the European Darts Trophy. “It’s the best win of my career,” he said. “I’m over the moon and it means the world to me to win this title.

The Warrior kicked off the final with finishes of 100 and 116 to establish a 2-0 lead, before Nicholson hit back to draw level. A 104 checkout in the fifth leg restored the advantage but the next five legs were shared taking the game to a last leg decider. Both players landed 180s in the game’s final leg as they both left 161 after nine darts, with Wes initially missing double 16 but then seeing Nicholson miss double 12 and double six for victory – allowing him back to post double four to claim the title. “I thought I’d thrown it away at the end and maybe Paul should have been lifting the trophy. I missed one dart in the tenth leg to take the win and then another in the last leg and thought my chance had gone, but the luck was shining down on me. “To come here and win this tournament means everything and it’s a huge boost for me ahead of Thursday and the Judgement Night in the Premier League.” “It’s a very big week for me and there’s a few scenarios which could happen in the Premier League on Thursday, but I’ve got to go up there and win my game against Andy Hamilton and that’s what I’ll focus on this Thursday.”

The Warrior’s route to the final began on Saturday evening with 6-3 first round win against Germany’s Tomas Seyler. He then edged out former World Youth Champion Arron Monk 6-5 in Sunday’s second round fixture. Easter Monday saw the conclusion of the tournament with the remaining 4 rounds played out across two sessions. Wes saw off Peter Wright 6-4 in the third round and then overcame Justin Pipe by the same scoreline to set up a semi-final clash with Mensur Suljovic. The semi-final was a high quality encounter which resulted in Wes coming from 2 legs behind to defeat the Austrian 6-4 with a 100.37 average including 3 x 180′s.

The Warrior kept his 2013 Premier League chances alive after defeating Gary Anderson Anderson 7-5 under the severe pressure of looming relegation, and having undergone treatment for a persistent shoulder injury earlier in the week.

A cortisone injection allowed Wes to play through the pain in the must-win match and after a nervy start from both players he established a 2-0 lead. Anderson’s reply was to reel off the next three legs to move ahead. 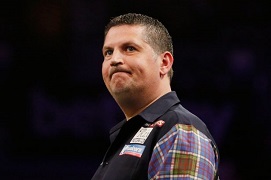 As the match progressed Wes capitalised on the home favourite’s inability to kill off legs, taking his chances with finishes of 132, 84 & 120 at key moments to silence the Scottish crowd and draw level at 5-5. The Warrior then took the eleventh leg and sealed victory in the next with a 72 checkout to take away both points and jump above Anderson in the Premier League table based on leg difference. “I rode my luck a bit tonight,” admitted Wes. “Gary scored well but he didn’t finish well and he let me in, and I took my chances. “I’ll take the two points because I’ve lost games which I should have won this season and I’m still in the hunt – it’s all to play for next week now!” When questioned about his shoulder Wes said “This was the best it’s been since October and I was pain-free for the first time in a long time, and hopefully I can get back to my best now.” Wes will now meet Andy Hamilton in Brighton next week, where once again he will be targeting a victory to help avoid the drop.